A real event-based comic book about the struggles faced by Hong Kongers as the city's human rights conditions deteriorate. 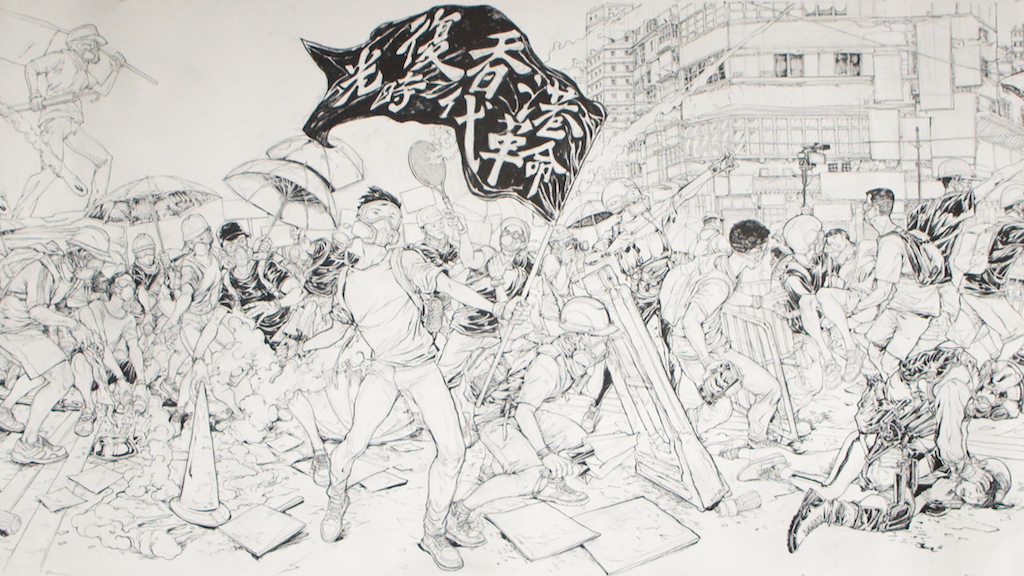 Award-winning comic book artist, Austin Jingxiong Guo, also known as Daxiong (Big Hero in Chinese), is working to produce a comic book about the experience of a young boy who witnessed the protests that took place in Hong Kong from 2019 to 2020. The protests were the result of the city's Fugitive Offenders Amendment Bill, also known as the Hong Kong Extradition Bill, designed to allow the Hong Kong government and the Chinese Communist Party to infringe Hong Kongers' rights provided by the Basic Law.

You have probably heard about the events in Hong Kong from newspapers and TV networks. And Austin's artwork will give you a better idea of what those events are like in the eyes of the average Hong Kongers.

The book depicts a young Canadian boy of Hong Kong origin. He is slightly introverted and does not know much about the world beyond the country he lives in. He certainly has no idea what the Chinese Communist Party is willing to do to maintain its power.

As the conflicts between the pro-democracy and pro-CCP groups in Hong Kong heat up, everyone in our story, including the main character's families and strangers he comes across, is forced to make some difficult choices.

How will each character view the situation in Hong Kong? What will each of them do based on what they believe is important? And what choices will our main character make? At least we know there is unlikely to be a happy ending for everyone in our story.

The book is expected to contain around 100 pages of Austin's drawings.

Austin Jingxiong Guo is a Chinese American comic book artist, editor, and publisher. He has received recognition for his work in the industry, including first place at the Shanghai Animation & Comic Competition and top honors at the 33rd annual Angoulême International Comics Festival.

Since 1999, through his studio, Austin has published more than 100 titles distributed in China, Japan, and Taiwan. His MuoWang series was published and distributed in France by Soleil Publications. After winning top honors at the 33rd annual Angoulême International Comics Festival for his work in Demi-Gods and Semi-Devils, Austin was offered a contract to work with Soleil Publication on the book Muowang and La Guerre des Orcs, which received a lot of praise in France and were translated into German and Italian in 2013.

In 2010, after moving to New York City, Austin became an artist on the Top 10 Special #1 with Wildstorm Productions. He was credited as the artist on the graphic novella Star Wars: Adventures: Luke Skywalker and the Treasure of the Dragonsnakes with writer Tom Taylor through Dark Horse Comics. And In the next year, Star Wars Adventures: Boba Fett and the Ship of Fear were the year's top 5 best-selling comic books.

Austin was the artist for a 10-page story titled "Superman and Doctor Light in Samurai" in DC's 80 Page Giant, Justice League of America, written by Amanda Mcmurry.

Where we are now

So far Austin has finished around 40% of the book. We would appreciate your financial help so that Austin can finish the entire book and make the copies available to the general public.

We appreciate your support!

Please leave your Mailing Address on the "Add a note" when you make your donation through  Paypal if you meet the amount for reward.

A digital copy of this comic book

Be among the first to enjoy Austin's latest work!

You'll be listed as one of the top supporters of this project. And Austin will send you a signed copy of this book along with an original sketch of himself. Shipping included.

Everything at the $150 level + Austin will hand draw a customized book cover for your copy. Shipping included.

Ask the expert anything on Glasso Store

We will follow up with you via email within 24-36 hours. Please answer the following questionnaire:

Sign Up for exclusive updates, new arrivals and insider-only discounts

We promise to only send you good things

View cart
×
This email address is already registered!
is added to your shopping cart.
Qty:
Go to cart